GCSE Geography students, accompanied by Geography tutor, Mark Leaford and Head of GCSE, Amy Cockerill, took part in a field trip into Cambridge to investigate the traffic congestion in a number of areas within the city. This fits into the Urban Issues and Challenges topic of the Geography GCSE. The main aim of the investigation was to collect data to allow us to answer questions on familiar fieldwork which is assessed in Paper 3 of the examination. 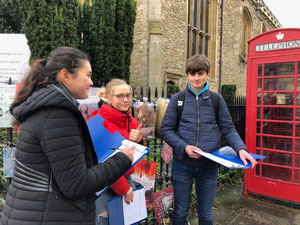 An important constituent of this investigation was the recording of environmental characteristics of each site and if any management strategies were being employed to reduce the amount of traffic. To this end, we all carried out an environmental quality survey of each site, noting any signs of both air and sound pollution. In addition, we also completed a management log to note down any traffic management schemes that were being used to reduce traffic congestion, such as traffic lights and cycle lanes. Furthermore, we performed an analysis of strengths, weaknesses, opportunities and threats (SWOT). In this way, we were able to record the positive and negative aspects of specific sites in relation to the traffic management strategies, along with the opportunities and threats that the sites may face due to traffic congestion and the schemes of management meant to combat the excess use of vehicles.

Market Square was the first point of investigation before embarking along a transect towards Cambridge Station and stopping at a further seven sites in order to count the traffic. At Market Square, we were divided into two groups of three. In our groups, we assigned each person to look out for a particular vehicle or for pedestrians. Data was then collated for future analysis. This was followed by a timed exercise of two minutes. During these two minutes, we made a tally of how much traffic passed us. After the two minutes was over, we compared our data and we took photographs of traffic management schemes that were being employed, providing us with evidence for our management observations. It was then time to move onto the next site under investigation. 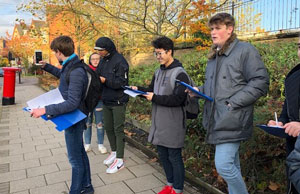 Following Market Square, we travelled to Downing Street, where we were able to begin the traffic count and all of the paper work at a quicker pace, having had a ‘practice’ attempt at Market Square. We knew exactly what we had to do and so were able to complete this site relatively quickly. The next locations that we visited were Regent Street, Gonville Place, Glisson Road, Tenison Road and on to our penultimate site, Cambridge railway station. We then moved slightly away from the station along Station Road to the seventh site. We performed our final traffic count here and carried out the environmental quality survey, the SWOT analysis and completed the management log. 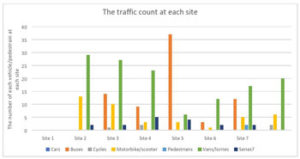 We compared the data that we had gathered and from this, calculated averages in order to create graphs to illustrate what we had discovered. We were surprised to note that of all the modes of transport we recorded, cars featured the least. However, vans and lorries were prevalent at all the sites we visited suggesting that traffic management strategies may need revisiting.

All in all, this was an invaluable exercise which helped to bring to life some of the aspects of the Urban Issues and Challenges topic that we had learned about in class.