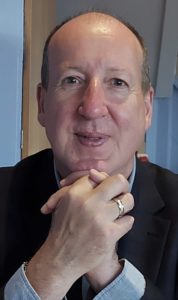 Richard holds an MA in Natural Sciences from Cambridge, a PhD in Laser Plasma Physics from Queen’s University Belfast and a PGCFHE from Ulster University. He is also a Chartered Physicist and Member of the Institute of Physics. Richard is an A level Mathematics and A level Physics tutor at MPW London.

From Nuclear Reactor Engineer to Teacher

After I finished my PHD, in the middle of the ‘80s, I got a job in the electricity industry, working at Marchwood Engineering Laboratories and then Berkeley Nuclear Laboratories for 11-12 years. During my time in the industry, I worked mainly in the nuclear area, staying in the engineering and research side. I worked in a team that was responsible for inspection and repair of nuclear power station plant – so robotic engineering repair of nuclear reactors.

After this, I worked for Seagate Technology, who make hard drives for computers, for a couple of years as a technology transfer engineer. This was followed by various engineering roles in manufacturing industry, on the regulatory and higher tech sides. I then worked for a company that manufactured scientific instruments, based on Raman spectroscopy – so very physics focused.

I started tutoring by ‘accident’, a friend asked me to help tutor their daughter in Physics and Maths for her A levels – that really got me into teaching. I then became a Science tutor with the Open University alongside my engineering jobs and realised that I was enjoying the teaching more than the engineering work. So, I decided to pursue a teaching career and began as a Mathematics lecturer at Belfast Metropolitan College, staying for 9-10 years, and I haven’t looked back since. I’ve since taught for a year at a STEM academy in Islington, teaching Maths and Engineering subjects, before joining MPW in 2016.

It’s really the love of the subject that is the basis of my interest in teaching, and I also enjoy working with young people. I’m very subject focused. I love Physics and Mathematics, and the relationship between the two. I got interested in Physics (and Astronomy) when I was very young, it was inevitable that I would become a Physicist. I love the role that Mathematics plays in physics and in explaining what goes on in the world and the power of it to predict things and its use in engineering and technology.

How Would You Describe MPW?

MPW is special. MPW allows me to focus on teaching, as there are other roles dedicated to pastoral care and admin. The small class sizes are also very beneficial both for me as a teacher and the students. One of the great things about MPW is the diversity of the young people that attend, they’re from all over the world.

Be organised, use your time wisely, be effective in what you do. For us teaching Physics and Mathematics, what we’re really trying to do is get the students to go deep in the subjects, to really understand them at a deep level. So, don’t go for shallow learning, really try to understand the principles of things. You don’t get to do that without a certain amount of pain and effort. Push yourself, tackle difficult problems and really try to get the grips with the concepts and how they all work. You’ve got to be prepared to put in the effort and don’t get disheartened if it doesn’t work out straight away.

Tell us About You

I did my first degree at Cambridge before returning to Belfast for my PHD, where I met my (now) wife – we did our PHDs in physics at the same time and we actually got married while we were still research students. I’m family focused, I have a daughter and two sons, all grown up now. I play tennis, I enjoy gardening and have been active in politics.