Our annual Celebration of Achievement is one of the highlights of the academic year with this year’s event taking place in the Great Hall of Homerton College, a venue that is beginning to feel like home. It provides an impressive but relaxed atmosphere for an event where we look back on the successes of the 2018/19 academic year and find out what everybody is up to now.

Our current students played an important part in the event’s proceedings. Three of this year’s GCSE cohort gave a talk on their experiences at MPW. Subin, Minh and Miro impressed us all with their eloquence, not to mention their bravery as they described the features they particularly enjoy about college life to a large audience. Such a talk has become a tradition at our awards evening, so it was pleasing to see the prize for best performance by a GCSE student go to Guzalya. who had spoken to us in a similar capacity last year. She is now studying the first year of A levels. The winner of the Andrew Lewin Memorial Prize for the best performance by a lower-sixth student, Anh, is now study the second year of his A levels and looking forward optimistically to reading Computer Science at University, while currently contemplating revolutionising our cafeteria with an online ordering system. 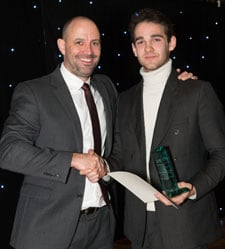 Some old friends of the college returned to present awards, with Mr Roy Murray drawing on many years of teaching experience to present the Helen Lee Memorial Prize for the best performance by a student studying A levels over two years. Several of the awards were presented by our Assistant Principal; Elpida Christianaki, in her role as personal tutor she had guided many of last year’s prize winners to reach their full potential in their exams. The prize for best performance by A level retake students was shared this year by George and Ash, whose personal stories of improvement were related with warmth and humour by Frankie Frangeskou, Director of Studies.

The Principal, Markus Bernhardt, started the evening sounding like a man who had outstanding news to share and finished the presentations, by handing over his own Principal’s award proudly to Buster. The evening wasn’t over: there was still a chance for everybody to pick up their certificates, a final photo or two, canapes, another drink and a few more conversations finding out what everybody has been doing since last June.

It was a wonderful evening and we would like to thank everybody who joined us.