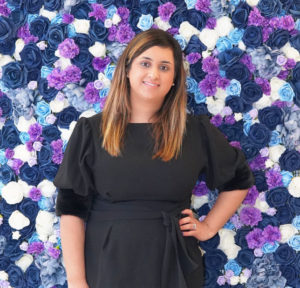 Pretty Basra is a consultant director optometrist, General Optical Council (GOC) panel member, fitness to practice committee member for the GOC, two-time finalist for ‘Optometrist of the Year’, literacy champion for the National Literacy Trust, mum of three, business owner (Pretty’s Sweets) and soon to be a PhD graduate.

However, rewind to Pretty’s A level results day, and her lifelong ambitions appeared to be irreparably shattered.

How did you feel when you first received your A level results?

It feels like yesterday when I think about it. It’s clear as a bell. I just felt absolute pure devastation. Even though I sort of knew I wasn’t going to perform very well, some part of me thought maybe I’ll be ok. Then, when I saw my results in black and white, it really, really hit home. This was going to affect my whole future. Everything that I thought I was going to do with my life, I couldn’t do anymore. It was like the world was falling apart around me and I just wanted to be swallowed up into the ground.

My parents are problem-solving people. They were like, ‘OK, it’s happened, now what are your options?’ They asked me, based on my results, if I wanted to study. They asked if I got these results because I was forced or pushed into studying against my will. That was never the case because I’ve always wanted to do what I’m doing now. It was more I felt at that point, that I didn’t have the intelligence to get the A levels results I needed to get to where I wanted to be. I discussed everything with my parents and they provided me with two options; stop everything now and find another job or carry on with my current job working as an optical assistant in Vision Express. However, I thought to myself I don’t want either option. I don’t want to just settle and move on.

Initially, I didn’t realise that I could do them [my A levels] again. My school couldn’t facilitate that process. Then I started doing a little digging and eventually booked to see MPW based on the testimonials on its website.

At the time I felt like I was grieving. I just felt so sad and broken that I had to go and say I’m sorry. I thought that no one was going to be able to get me from an unclassified or an E to a C, let alone a B or A. I just felt that I didn’t have that capability in me to be able to perform to that level because I’ve never thought of myself as an intelligent person. All I’ve ever done is just try my best.

When I went to MPW, I needed to re-sit Chemistry and Biology and I chose to take Psychology in my own time. I was introduced to [tutor] Dave Cox first and after that, literally, my life changed. I get really emotional thinking about it.

My mum and I spoke to Dave. We had a conversation about my career aspirations. Not once did he ask me why I got an E. I felt like I’d need to justify why my performance was so bad however he just spoke to me about what I wanted to do and where I wanted to be. It wasn’t really about chemistry; it was getting to know me as a student and discussing what you guys do at MPW and how intense it is. It’s sort of short-term pain for long-term gain. He explained that I would be doing exam paper after exam paper, lessons will be very intense, there will be late finishes, but in that year, he would try his best to get me where I wanted to be.

Clear as day I remember him saying at the end of that conversation, “what grade are you hoping for in chemistry?” and I said to him I would love to get a C. My thinking at the time was the minimum requirement for optometry was BBC so if I could get a C in chemistry (as that was my hardest subject), I would try and get a B in psychology and a B in biology.

Then he asked what grade do you want and I said, “a C.”

He wrote down an A.

I thought to myself, am I missing something here.

I remember laughing at him and saying, “Ok Dave, we’ll see”. Even my mum was saying that I’d be happy with a C and moving from an E to C would be more than enough.

Then obviously when I received my results, I realised he was right. He had given me everything; the education, the knowledge, the skills, the invaluable experience of being taught by an examiner, past paper conditioning and most importantly, the confidence to know that if you can do it 50 times in a classroom setting, you can do it once under exam conditions. It was the same for biology. The small classes and regular exam papers just changed everything for me.

I went to a private school before MPW, so my class sizes were small anyway, but having them so small at MPW – there were five of us in the class – you can’t hide anywhere. If I didn’t know it, Dave knew that I didn’t know it. It made me want to learn quicker, pick up the knowledge and really invest in the process because I didn’t want to get caught out. I couldn’t hide behind someone else.

I had an extremely good rapport with Dave. It’s so amazing to have a college like Mader Portman Woodward to enable someone to not just think they’ve failed and their life is over, but to give them that extra step. Yes, you’re a year or two behind – but you can get there if you want to with the right support.

How was A level results day the second time around?

When I got my (re-sit) results, I’d missed an A in biology by a few points. I wanted to go to Aston University (I did get offered other universities, based on my grades of ABB – but Aston wanted AAB). So, again, I had that conversation with my parents and discussed the possibility of now going to university, but not the one I originally wanted. I wasn’t happy because I wanted to go to Aston University so I did another unit in psychology the following January, taking another year out. I eventually got an A, giving me AAB overall, and an unconditional offer from Aston.

Whereas the previous year was so intense – soul-destroying and character building all at the same time – after I got my unconditional offer in January, I felt I could breathe and relax before starting uni. It was an absolutely amazing feeling.

The exam preparation and revision skills I gained at MPW were hugely beneficial at university because I felt like I had a head start. And, because I was already put back two years, when I went into exams, that was all I was focused on. I thought I couldn’t afford to re-sit any year here. I already felt like a failure. I was two years behind. This was it.

In the end, I didn’t need to re-sit any exams and graduated with 2:1. Each year, results day was hugely nerve-racking for obvious reasons and the fear of failure still haunts me today.

What would be your advice to students who are unhappy with their A level grades or don’t make the grades they need for university?

My advice would be to do it. If you can afford to do it again, do it. What have you got to lose? My mum and dad said to me when I got my A level results the first time around, “Do you want to always think ‘what if’? Do you want to think ‘what if I had done it’ in the future.” That was my opportunity to do it and to go for it. It was either that or live the rest of my life in regret.

What was your learning journey after MPW?

My personality is such that I want to be able to do everything and gain any qualification that I can. Knowledge is endless and I want to know as much as possible to allow me to increase my skillset and then deliver that expertise to my patients in a clinical setting. For me, it’s always been about being able to offer full care to my patients, without having to refer them, so I can ensure their quality of care.

I currently specialise in children’s vision and love improving their vision as much as I can. I was hoping at some point in my life that I would be able to run my own pediatric clinic in a hospital somewhere – just to try and make a difference. I’m hugely passionate about children’s eyecare and I try to bring that into practice life with everything that I do. I’m also keen on lecturing, which was part the reason for completing my PhD, and I’d love to learn laser surgery.

What would be your advice to aspiring optometrists?

If you have that passion, go for it. Optometry as a profession is amazing. I love being able to preserve sight, give sight and better people’s quality of life by providing a pair of glasses. Vision is so precious, especially for patients who lack it. That self-satisfaction you gain by improving the vision and quality of life for that patient can be life-changing.

It’s a fantastic profession which enables you to form bonds with patients, especially those you see year in year out, which can be really rewarding. You also have so many options in the field and you can do so much with it if you want; there are so many avenues open to you.

I think with the pandemic, things have definitely changed in optometry. Whereas we haven’t always been recognised in the same way as other healthcare professionals, our skills have been brought to the fore as we’re having to see the patients that the hospitals can’t at the moment. The profession, therefore, can be whatever you want it to be.

Find out more about the retake courses available at MPW: