News Category MPW London
Home > About > News > ‘What is Your Name?’ Nomenclature in The Tempest

‘What is Your Name?’ Nomenclature in The Tempest

Richard Martin, Head of English & Theatre Studies at MPW London, explores nomenclature in the Tempest and the significance of names as part of a series of lectures to supplement teaching on this play. See Richard’s previous article ‘The Two Tempests in the Tempest‘.

Analysing the names of the characters in The Tempest (1611) is a legitimate activity sanctioned by the play itself. When Ferdinand finds out Miranda’s name he instantly analyses its etymology: 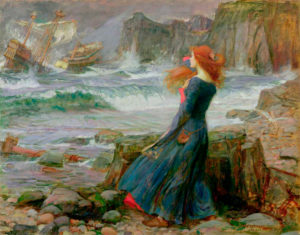 ‘Mirando’ in Italian means ‘wondrous’ and derives from the Latin verb ‘mirror’ meaning ‘to wonder’ or ‘to be astonished by’. It is ironic that he reaches an even more etymologically exact understanding of her name prior to him knowing it, for in the first speech he addresses to her he ecstatically addresses her as ‘you wonder!’ Later in the play, Prospero promises to ‘bring forth a wonder’, just prior to revealing Miranda and Ferdinand playing chess: if the ‘wonder’ for the wedding party is the fact of two young people playing a board game when they had been (by Prospero) pronounced dead, the ‘wonder; for Prospero is surely his daughter, Miranda for whom he displays such a possessive – and perhaps problematic – love. Like ‘Imogen’ (in Cymbeline), the name ‘Miranda’ is Shakespeare’s invention and thus further underlines the importance of nomenclature in this play. Miranda is astonishing and the first evidence of this is her resistance to her father in her first speech. She insists that if she had the divine power her father is currently exerting through the orchestration of a tempest, she would have used that power antithetically to stop it. Miranda’s compassion and identification with the ‘heart’ are the more admirable given that her more cerebral father has still to learn ‘the virtue of compassion’ – a quality he correctly identifies in her early in the play, but will not display himself until his ‘alchemical’ change at the beginning of Act V. If Caliban is a study in ‘Nurture’ – whatever Prospero may say to the contrary – Miranda is herself an argument for ‘Nature’. Her empathy is innate: she has ‘suffered with those that (she) saw suffer’.

What of her father’s name? On the face of it, his name is ironic at the beginning of the play since the fact that he is in exile on a ‘bare island’ does not seemingly indicate that he has ‘prospered’. The audience must wait till the end of the play until the name appears a fitting one: Antonio is obliged to ‘resign’ his ‘dukedom’ and more remarkable still, Prospero has put his descendants on the throne of Naples. This is perhaps the ‘poison given to work a great time after’ to which the genial Gonzalo inadvertently alludes in his uncharacteristically Machiavellian image at the end of Act III.

To a post-colonial audience, however, the name may appear fitting from the beginning of the play given that Prospero prospers from a native work force. Caliban at two points of the play removes the final syllable from his slave master’s name and in doing so makes even more available to the attentive theatre-goer the idea of exploitation. It is notable that in one of these instances he is specifically cursing the slave master Prospero for the torments inflicted upon him:

‘All the infections that the sun sucks up From bogs, fens, flats, on Prosper fall and make him By inch-meal a disease!’

The play’s first audience might find another idea more prominent in their thinking. Prospero’s name is the anglicised version of the titular black magician Dr Faustus in Christopher Marlowe’s 1592 play. In contrast to Shakespeare’s play, the name Faustus (‘he who prospers’) appears ironic only at the end of the play when Faustus is dragged down to Hell.

Stretch opportunity. If you have never read Faustus’s Final Soliloquy, or indeed Marlowe’s play as a whole, I urge you to do so.

At the beginning of the play, given the academic success Faustus claims in his first soliloquy to be enjoying, it seems entirely appropriate. It may be that Shakespeare’s play not only pays tribute to Marlowe’s but forges a connection between the two magi: Faustus proposes consigning his books to the flames to escape hellfire, while Prospero decides on a waterier fate for his – ‘I’ll drown my book.’ Ostensibly, Prospero is a practitioner of white magic, while Faustus is assuredly not, but can we be sure of this binary?

It is Prospero’s very name – and the inter-textual allusion it embodies – which enables the audience to begin to question the polarity.

The binary between the practice of white and black magic is in The Tempest provided by the seemingly antithetical characters Prospero and Sycorax. Many critics have endorsed the idea that they are antithetical figures (see especially Kermode’s 1954 edition of the play) without acknowledging that we only have Prospero’s word for this. Caliban’s impotent curse memorialises his mother’s name by alluding to a ‘raven’s feather,’ given that ‘corax’ is the Latin for raven. The poignancy of Caliban’s situation is implicit in his invocation to his mother – he, like Miranda, has not inherited his parent’s magical power. Allusion to his mother is an attempt to make his malediction efficacious but it remains a thing of words with no operative status.

But Sycorax’s name is richer still when we consider the way her name connects her to Medea. Ovid’s epithet for this witch is ‘Scythian raven’ making a striking link with Sycorax via the last two syllables – an effect reinforced by the first two letters of her name featuring in the adjective ‘Scythian’ and thus functioning in a loosely anagrammatic way: S Y CORAX.

Where does this link between Medea and Sycorax, made available to us through her name, take us?

Prospero’s ‘abjuration of magic’ speech, which follows hard on the heels of his abjuration of revenge speech (though it is never called that) at the beginning of act V, begins with the lines:

‘Ye elves of hills, brooks, standing lakes and groves, And ye that on the sands with printless foot Do chase the ebbing Neptune and do fly him When he comes back; you demi-puppets that By moonshine do the green sour ringlets make, Whereof the ewe not bites, and you whose pastime Is to make midnight mushrooms, that rejoice To hear the solemn curfew; by whose aid, Weak masters though ye be, I have bedimm’d The noontide sun, call’d forth the mutinous winds, And ‘twixt the green sea and the azured vault Set roaring war: to the dread rattling thunder Have I given fire and rifted Jove’s stout oak With his own bolt; the strong-based promontory Have I made shake and by the spurs pluck’d up The pine and cedar: graves at my command Have waked their sleepers, oped, and let ’em forth.’ 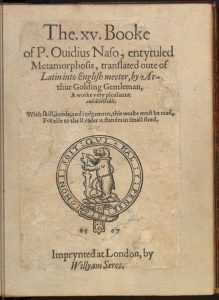 Now compare Medea’s speech from Book 7 of Ovid’s Metamorphoses from Arthur Golding’s 1567 translation (‘a work very pleasant and delectable’) to which Shakespeare would have had access. It may appear from the precision of the borrowing that Golding’s version – alongside John Florio’s translation of Montaigne’s Les Essais – was open on his desk:

‘Ye Ayres and windes: ye Elves of Hilles, of Brookes, of Woods alone, Of standing Lakes, and of the Night approche ye everychone. Through helpe of whom (the crooked bankes much wondring at the thing) I have compelled streames to run cleane backward to their spring. By charmes I make the calme Seas rough, and make the rough Seas plaine, And cover all the Skie with Cloudes and chase them thence againe. By charmes I raise and lay the windes, and burst the Vipers jaw. And from the bowels of the Earth both stones and trees doe draw. Whole woods and Forestes I remove: I make the Mountaines shake, And even the Earth it selfe to grone and fearfully to quake. I call up dead men from their graves: and thee lightsome Moone I darken oft, though beaten brasse abate thy perill soone. Our Sorcerie dimmes the Morning faire, and darkes the Sun at Noone.’

While Prospero has consistently identified himself as Sycorax’s opposite – as have many critics – the net effect of Prospero being given the words of Medea and of Sycorax and Medea being linked with one another is to connect Prospero to the aforementioned sorceresses. Prospero is not seemingly aware of this parallel and the irony it produces but by the same token Prospero’s identification of Caliban as a ‘thing of darkness’ later in the scene offers the audience something more notable than the speaker seems aware. The play is notable for offering us a set of ironies – even in its final sequence – at Prospero’s expense. Note the not unconnected fact that Prospero is still striving to demonise Sycorax at the end of the play by identifying her as a ‘witch’ (when he is a wizard), condemning her for activities that parallel his. He describes her in seemingly condemnatory terms as:

That could control the moon, makes flows and ebbs…’

The analepsis here in respect of Prospero’s earliest activity in the play is particularly notable.

Prospero’s orchestration of the tempest is aided by his spirit, Ariel. It is notable that Ariel also served Sycorax – a fact that itself begins to chip away at the distinction that Prospero makes between him and the erstwhile sorceress of the island he has seized. Critics have often endorsed this polarity between the white man practising white magic and the black woman practising black magic without acknowledging what a transparent move on Prospero’s part it represents. Here is Frank Kermode writing in the decade in which Britain still had an empire:

‘(Sycorax) is a practitioner of ‘natural’ magic, a goetist…whose power is limited by the fact that she could command, as a rule, only devils and the lowest orders of spirits…Prospero, on the other hand, is a theurgist, whose art is to achieve supremacy over the natural world…the spirits he commands are the daemons of neo-platonism..’ 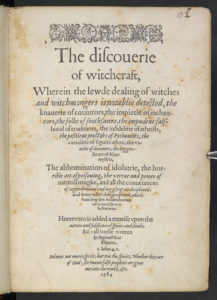 Kermode’s proviso ‘as a rule’ does not necessarily save his claim from the nonsensical since Ariel serves/served both Sycorax and Prospero. Indeed, Prospero in a moment of intended but not entirely successful irony identifies Ariel as his ‘slave’ but his previous employer’s ‘servant’. Now to Ariel’s name itself which challenges Kermode’s claim (concerning Sycorax’s trafficking with only ‘the lowest order of spirits’) because air along with fire are the two higher of the elements. Thus Ariel might count as a ‘daemon of neo-platonism’ and such a status has an impact on our reading of Sycorax. Frances Yates has argued that Prospero is intended as tribute to John Dee, a magician, astrologer and mathematician who served Queen Elizabeth but died in poverty in 1608. Elizabeth’s successor, King James would have no truck with Dee. His attitude to magic was unequivocal and is articulated both in his uncompromising 1597 tract, Of Daemonologie (which denies any distinction between white and black magic) and his banning of Reginald Scot’s The Discoverie of Witchcraft (1594). The latter work is radical because it denies the existence of witchcraft excepting in the minds of its persecutors, thus anticipating the contemporary consensus view of the seventeenth century ‘witch-craze’.

While Yates’ claim threatens to disable those who would see Prospero in critical terms it does makes some sense in the light of the fact that Dee claimed to be in contact with a spirit called Uriel. If Uriel could have changed his name he might have settled on Ariel since the latter name invokes one of the two higher of the four elements in hermetic thought.